A Survey of Amphibians, Reptiles, and Birds In Northeast India

Northeast India supports some of the biologically richest areas in the world. This region represents an important part of the Indo-Myanmar biodiversity hotspot, one of the 25 global biodiversity hotspots recognized currently. Today, the forest cover in northeast India is one third of its geographical area, and the rate of habitat loss here is of serious concern. The tropical and subtropical moist forests of this region are particularly important, as they not only support most of its biological diversity, but are also more vulnerable to human exploitation and settlement.

Despite its importance, this region has remained poorly explored, and all evidence suggests that much of its diversity is being lost without even being recorded. At the same time, the lack of baseline biological data prevents reliable evaluation of area-specific biodiversity values, thus seriously hindering effective prioritization of areas for conservation. Indeed, this dearth of information is true for most, if not all biotic groups in northeast India, including even 'popular' biota such as higher vertebrates like birds and mammals.

We undertook a survey of amphibians, reptiles, and birds in low- to mid-elevation sites along the montane tracts of northeast India. Nine sites, centered on existing protected areas were covered over a period of eight months between October 2000 and June 2001. The main objectives of the project were to inventory forest species in the three taxonomic groups, and collect information on conservation issues in each area. Amphibians, reptiles and birds comprise a significant proportion of the region's vertebrate diversity, and along with basic inventorying, the project also aimed to investigate the role that they can play in biodiversity evaluation and conservation prioritisation in the region.

The survey yielded a number of new range records in the three faunal groups, and in the case of amphibians and reptiles, species new to science as well. Excluding records that are new for northeast India, species recorded during this survey comprised 54%, 53%, and 32% of all the frog, reptile, and bird species, respectively, known from the region. Preliminary analyses of diversity patterns in forest frogs, lizards and birds across surveyed areas showed poor congruence between groups, not just in terms of species richness, but in patterns of turnover as well. From a conservation evaluation / prioritization perspective, this implies that any one of these groups alone may not be a good indicator of richness patterns of the other two. This suggests that patterns in more biotic groups (including invertebrates and plants) need to be closely examined and compared for more effective prioritization of areas for conservation attention in the region. In general, the survey gave a good indication of the extent to which biological information is lacking in the region, and highlighted areas and issues that need urgent scientific and conservation attention. An ornithological survey in north-east India 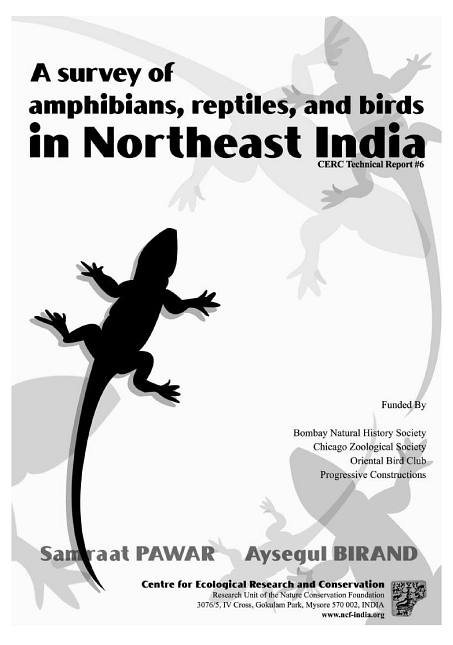 A survey of amphibians, reptiles, and birds in Northeast India